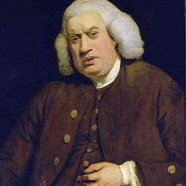 Samuel Johnson (18 September 1709– 13 December 1784), often referred to as Dr Johnson, was an English writer who made lasting contributions to English literature as a poet, essayist, moralist, literary critic, biographer, editor and lexicographer. Johnson was a devout Anglican and committed Tory, and has been described as "arguably the most distinguished man of letters in English history". He is also the subject of "the most famous single biographical work in the whole of literature," James Boswell's Life of Samuel Johnson.