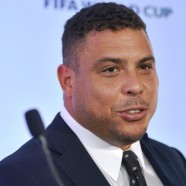 Ronaldo Luís Nazário de Lima (born 18 September 1976), commonly known as Ronaldo, is a Brazilian retired professional footballer who played as a striker. Popularly dubbed "The Phenomenon," he is widely considered to be one of the greatest football players of all time.

A three-time FIFA World Player of the Year and two-time Ballon d'Or recipient, Ronaldo was named in the FIFA 100, a list of the greatest living players compiled in 2004, and was inducted into the Brazilian Football Museum Hall of Fame and the Italian Football Hall of Fame..