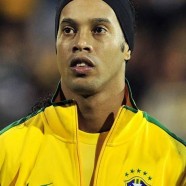 Ronaldo de Assis Moreira (born 21 March 1980), commonly known as Ronaldinho or Ronaldinho Gaúcho, is a Brazilian professional footballer and current club ambassador for Spanish club FC Barcelona after signing for them in September 2016.

His main playing position is as an attacking midfielder or forward. He won the FIFA World Player of the Year award in 2004 and 2005. Renowned for his technique, tricks, dribbling, overhead kicks, no-look passes and free kicks, Ronaldinho is regarded to be one of the best players of his generation