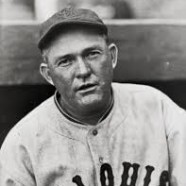 He was named the National League (NL)'s Most Valuable Player (MVP) twice, and was a member of one World Series championship team.