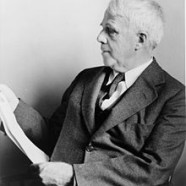 Robert Lee Frost (March 26, 1874 – January 29, 1963) was an American poet. He was born in San Francisco,California,U.S. He is well known for his realistic writings of rural life and his use of American informal (slang) speech.[1] His poems were often set in rural life in New England in the early twentieth century, and used these settings to look at complex social and philosophical themes. Frost has often been quoted by other people. He was honored often during his lifetime, receiving four Pulitzer Prizes for Poetry.