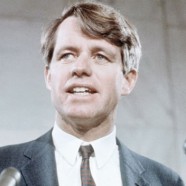 He served as a senator for New York from 1965 until his assassination in 1968. He was previously the 64th U.S. Attorney General from 1961 to 1964, serving under his older brother, President John F. Kennedy and his successor, President Lyndon B. Johnson. An icon of modern American liberalism and member of the Democratic Party, Kennedy ran for the Democratic presidential nomination in the 1968 election.

After having served in the United States Naval Reserve as a Seaman Apprentice from 1944 to 1946, Kennedy graduated from Harvard College and the University of Virginia School of Law.