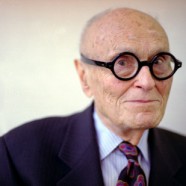 Philip C.Johnson (born july 8,1906) in Cleveland-USA, was an american architect and theorist  best known for the design for his own home ,the glass house , in new cannan ;CT(in 1949-1950) ; on principles of space unification derived from ludwig Mies vAN DER ROHE with whom   he designed the Seagram Building Skyscraper,NEW- York City (1945) ,Further works include the Amon Carter Museum of western Art-TX in 1961, the new YORK state theater-Lincoln center in 1964 ,the american telephon and telegraph company building in new-york city between (1978-1984), and the cathedral of hope - Dallas in 1998.

-Philip C .johnson is especially known for Postmodern so in summary he was the  winner of  the "AIA God Medal" in 1978 and  the inaugural winner of the  "Pritzker  Architecture Prize" in 1979.

-the most  buildings realized by Philip C. Johnson are: Crystal Cathedral, IDS Tower and PPG Place