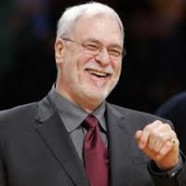 Jackson was the head coach of the Chicago Bulls from 1989 until 1998, during which Chicago won six NBA championships. His next team, the Los Angeles Lakers, won five championships from 2000 until 2010. In total, Jackson has won 11 NBA titles as a coach, surpassing the previous record of nine set by Red Auerbach.