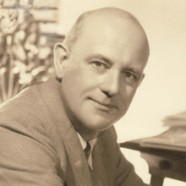 Sir Pelham Grenville Wodehouse, KBE (15 October 1881 – 14 February 1975) was an English author and one of the most widely read humorists of the 20th century.

Born in Guildford, the son of a British magistrate based in Hong Kong, Wodehouse spent happy teenage years at Dulwich College, to which he remained devoted all his life. After leaving school he was employed by a bank but disliked the work and turned to writing in his spare time.

His early novels were mostly school stories, but he later switched to comic fiction, creating several regular characters who became familiar to the public over the years.