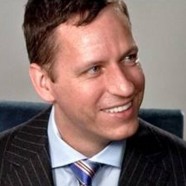 Peter Andreas Thiel (born October 11, 1967) is an American entrepreneur, venture capitalist, hedge fund manager, and social critic. Thiel co-founded PayPal with Max Levchin and Elon Musk (see PayPal Mafia) and served as its CEO. He also co-founded Palantir, of which he is chairman. He was the first outside investor in Facebook, the popular social-networking site, with a 10.2% stake acquired in 2004 for $500,000, and sits on the company's board of directors.

Born to Germans Klaus Thiel, a chemical engineer, and Susanne Thiel, in Frankfurt am Main, West Germany. Thiel has one brother, Patrick Thiel. Thiel moved to the United States with his parents when he was one year old, and was raised in Foster City, California.

Thiel was a US-rated Chess Master and one of the highest ranked under-21 players in the country.

Thiel studied 20th-century philosophy as an undergraduate at Stanford University. He received his B.A. in Philosophy from Stanford in 1989 and acquired a J.D. from Stanford Law School in 1992.

Thiel formed friendships with other students at Stanford, many of whom contributed to the Stanford Review. These include Keith Rabois, David O. Sacks, and Reid Hoffman. Some of these friends later took up jobs at PayPal (co-founded by Thiel) and became part of the PayPal Mafia.[citation needed]