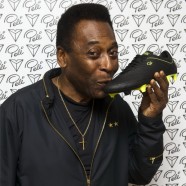 Edson Arantes do Nascimento ( born 23 October 1940),known as Pelé , is a retired Brazilian professional footballer who played as a forward.

He is widely regarded as the greatest player of all time. Pelé has also been known for connecting the phrase "The Beautiful Game" with football.

In 2013 he received the FIFA Ballon d'Or Prix d'Honneur in recognition of his career and achievements as a global icon of football.