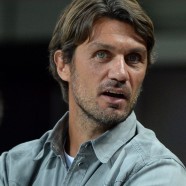 Paolo Cesare Maldini (born 26 June 1968) is a former Italian professional footballer who played as a left back and central defender for A.C. Milan and the Italy national team. He spent all 25 seasons of his career in the Serie A with Milan, before retiring at the age of 41 in 2009.