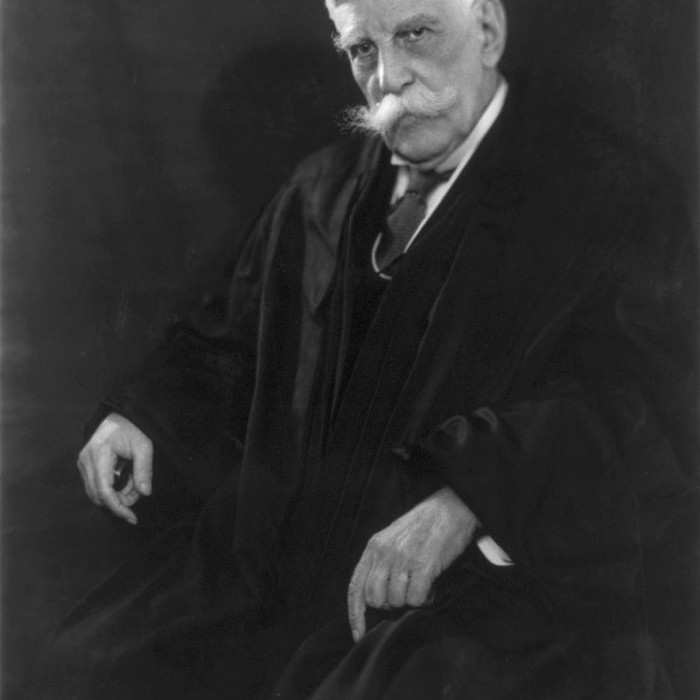 Noted for his long service, his concise and pithy opinions and his deference to the decisions of elected legislatures, he is one of the most widely cited United States Supreme Court justices in history, particularly for his "clear and present danger" opinion for a unanimous Court in the 1919 case of Schenck v. United States, and is one of the most influential American common law judges, honored during his lifetime in Great Britain as well as the United States.

Holmes retired from the Court at the age of 90 years, making him the oldest Justice in the Supreme Court's history. He also served as an Associate Justice and as Chief Justice on the Massachusetts Supreme Judicial Court, and was Weld Professor of Law at the Harvard Law School, of which he was an alumnus.

Profoundly influenced by his experience fighting in the American Civil War, Holmes helped move American legal thinking towards legal realism, as summed up in his maxim: "The life of the law has not been logic; it has been experience.

"Holmes espoused a form of moral skepticism and opposed the doctrine of natural law, marking a significant shift in American jurisprudence. As he wrote in one of his most famous decisions, his dissent in Abrams v. United States (1919), he regarded the United States Constitution as "an experiment, as all life is an experiment" and believed that as a consequence "we should be eternally vigilant against attempts to check the expression of opinions that we loathe and believe to be fraught with death.

" During his tenure on the Supreme Court, to which he was appointed by President Theodore Roosevelt, he supported efforts for economic regulation and advocated broad freedom of speech under the First Amendment. These positions as well as his distinctive personality and writing style made him a popular figure, especially with American progressives.

His jurisprudence influenced much subsequent American legal thinking, including judicial consensus supporting New Deal regulatory law, and influential schools of pragmatism, critical legal studies, and law and economics. He was one of only a handful of justices to be known as a scholar; The Journal of Legal Studies has identified Holmes as the third most cited American legal scholar of the 20th century.