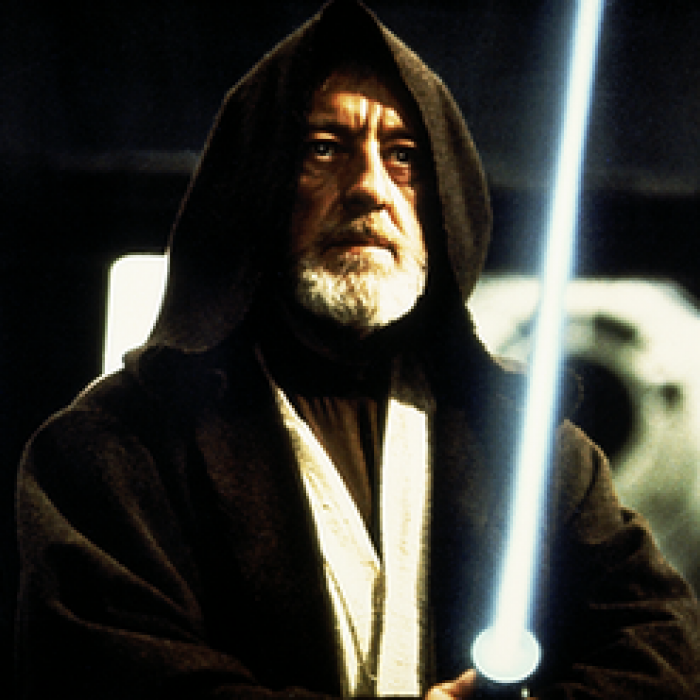 Obi-Wan "Ben" Kenobi is a fictional character in the Star Wars franchise, within the original trilogy he is portrayed by Alec Guinness, while in the prequel trilogy a younger version of the character is portrayed by Ewan McGregor. In the original trilogy, he is a mentor to Luke Skywalker, to whom he introduces the ways of the Jedi. In the prequel trilogy, he is a master and friend to Anakin Skywalker. He is frequently featured as a main character in various other Star Wars media.

Alec Guinness's portrayal of Obi-Wan in Star Wars Episode IV: A New Hope (1977) remains the only time an actor has received an Oscar nomination for acting in a Star Wars film.
Obi-Wan Kenobi is introduced in the original Star Wars living as the hermit Ben Kenobi on the planet Tatooine. When Luke Skywalker and the droid C-3PO wander off in search of the lost droid R2-D2, Ben rescues them from a band of native Tusken Raiders. At his home, R2-D2 plays Ben a recording of Princess Leia which explains that R2-D2 contains the plans for the Death Star, the Galactic Empire's superweapon. Leia asks him to deliver the droid and the plans safely to the planet Alderaan in order to help the Rebel Alliance. Ben reveals to Luke that his real name is Obi-Wan and that he is a Jedi Master, member of an ancient group of warriors that were hunted down by his apprentice Darth Vader, the apparent killer of Luke's father. He gives Luke his father's lightsaber and asks Luke to accompany him to Alderaan and take up Jedi training. Luke declines, but promises to take Obi-Wan as far as Anchorhead Station. After Luke finds his uncle and aunt killed by Imperial troops, he agrees to go with Obi-Wan to Alderaan and to train as a Jedi.
In the spaceport city Mos Eisley, Obi-Wan uses the Force to trick Imperial troops into letting them through a military checkpoint. They enter a local cantina and make a deal with two smugglers, Han Solo and Chewbacca, to fly them to Alderaan in their ship, the Millennium Falcon. During the journey, Obi-Wan begins instructing Luke in lightsaber training. He suddenly becomes weak and tells Luke of "a great disturbance in the Force". Emerging from hyperspace, the party finds that Alderaan has been destroyed, and the Falcon is attacked by an Imperial TIE Fighter. The trio chase the TIE fighter to the Death Star, and subsequently get caught in the Death Star's tractor beam. On board the Death Star, Obi-Wan shuts down the tractor beam, but Darth Vader confronts him and they engage in a lightsaber duel. Obi-Wan uses the duel to distract Vader as Luke, Leia, Han and Chewbacca escape to the Falcon. Although Vader strikes Obi-Wan down, his body mysteriously vanishes the moment he dies. At the climax of the film during the Rebel attack on the Death Star, Obi-Wan speaks to Luke through the Force to help him destroy the Imperial station.