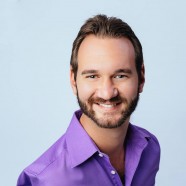 Nicholas James "Nick" Vujicic  . born 4 December 1982) is an Australian Christian evangelist and motivational speaker born with Phocomelia, a rare disorder characterised by the absence of legs and arms. His first book, Life Without Limits: Inspiration for a Ridiculously Good Life, was published by Rand om House in 2010 and has been translated into more than 30 languages.He markets a motivational DVD, Life's Greater Purpose, a short documentary filmed in 2005. The second part of the DVD was filmed at his local church in Brisbane. He markets a DVD for young people titled No Arms, No Legs, No Worries