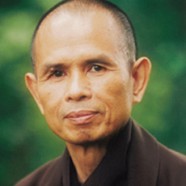 Thích Nhất Hạnh (born as Nguyen Xuan Bao on October 11, 1926) is a Vietnamese Buddhist monk and peace activist. He lives in Plum Village in the Dordogne region in the south of France,travelling internationally to give retreats and talks.

He coined the term "Engaged Buddhism" in his book Vietnam: Lotus in a Sea of Fire. A long-term exile, he was given permission to make his first return trip to Vietnam in 2005.

Nhất Hạnh has published more than 100 books, including more than 40 in English. He is active in the peace movement, promoting nonviolent solutions to conflict and he also refrains from animal product consumption as a means of nonviolence towards non-human animals.