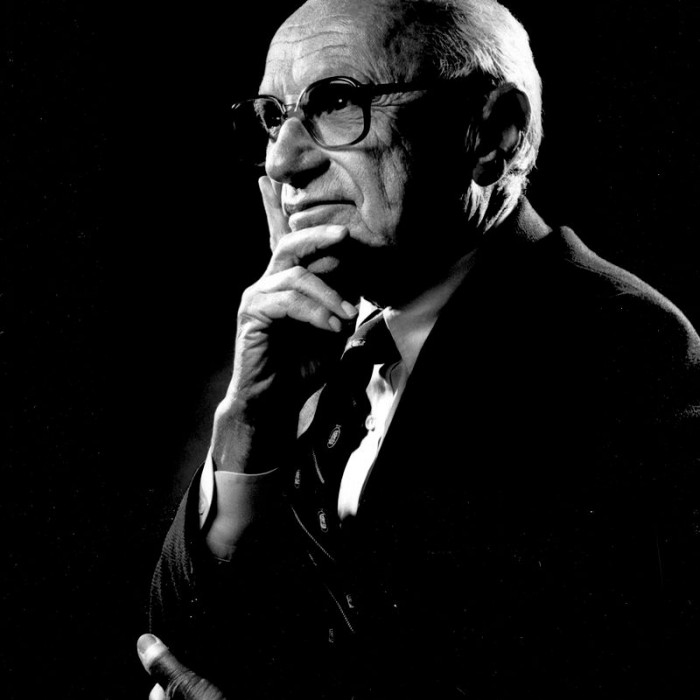 Milton Friedman (July 31, 1912 – November 16, 2006) was an American economist who received the 1976 Nobel Memorial Prize in Economic Sciences for his research on consumption analysis, monetary history and theory, and the complexity of stabilization policy.

With George Stigler and others, Friedman was among the intellectual leaders of the second generation of Chicago price theory, a methodological movement at the University of Chicago's Department of Economics, Law School, and Graduate School of Business from the 1940s onward.

Several students and young professors that were recruited or mentored by Friedman at Chicago went on to become leading economists; they include Gary Becker, Robert Fogel, Thomas Sowell, and Robert Lucas, Jr.

Friedman's challenges to what he later called "naive Keynesian" theory began with his 1950s reinterpretation of the consumption function. In the 1960s, he became the main advocate opposing Keynesian government policies, and described his approach (along with mainstream economics) as using "Keynesian language and apparatus" yet rejecting its "initial" conclusions.

He theorized that there existed a "natural" rate of unemployment, and argued that employment above this rate would cause inflation to accelerate.[He argued that the Phillips curve was, in the long run, vertical at the "natural rate" and predicted what would come to be known as stagflation.

Friedman promoted an alternative macroeconomic viewpoint known as "monetarism", and argued that a steady, small expansion of the money supply was the preferred policy.

His ideas concerning monetary policy, taxation, privatization and deregulation influenced government policies, especially during the 1980s. His monetary theory influenced the Federal Reserve's response to the global financial crisis of 2007–08.

Friedman was an advisor to Republican U.S. President Ronald Reagan and Conservative British Prime Minister Margaret Thatcher. His political philosophy extolled the virtues of a free market economic system with minimal intervention. He once stated that his role in eliminating U.S. conscription was his proudest accomplishment.

In his 1962 book Capitalism and Freedom, Friedman advocated policies such as a volunteer military, freely floating exchange rates, abolition of medical licenses, a negative income tax, and school vouchers. His support for school choice led him to found the Friedman Foundation for Educational Choice, later renamed EdChoice.

Milton Friedman's works include many monographs, books, scholarly articles, papers, magazine columns, television programs, and lectures, and cover a broad range of economic topics and public policy issues. His books and essays have had global influence, including in former communist states.