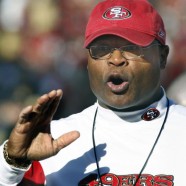 After playing college football for Baylor University, Singletary was drafted by the Chicago Bears in the 2nd round of the 1981 NFL Draft and was known as "The Heart of the Defense" for the Chicago Bears' Monsters of the Midway in the mid-1980s. He was inducted into the Pro Football Hall of Fame in 1998. Singletary later pursued a career as a coach, first as a linebackers coach for the Baltimore Ravens, then as the linebackers coach for the San Francisco 49ers. In 2008, the 49ers promoted Singletary to the head coaching position after previous head coach Mike Nolan was fired during the season and he remained in that position until he was fired with one game remaining in the 2010 season.