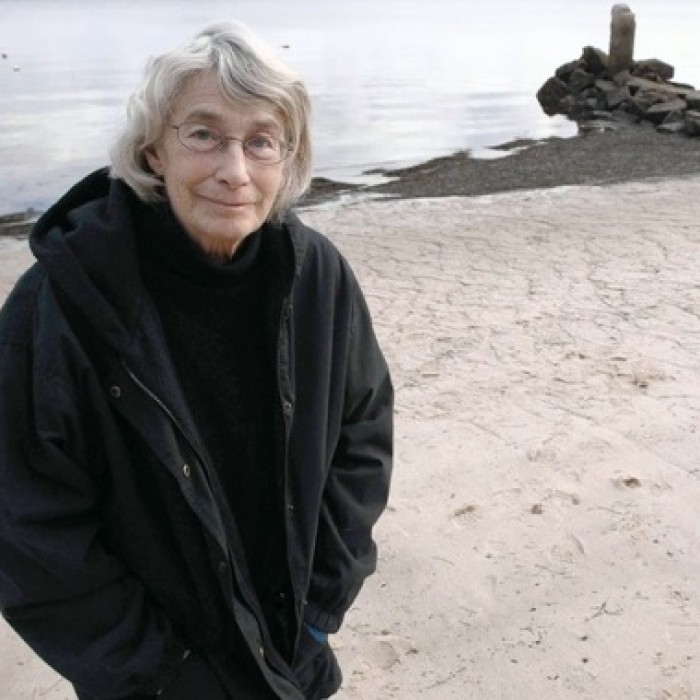 Mary Oliver (born September 10, 1935) is an American poet who has won the National Book Award and the Pulitzer Prize. The New York Times described her as "far and away, this country's best-selling poet."

Mary Oliver's poetry is grounded in memories of Ohio and her adopted home of New England, setting most of her poetry in and around Provincetown since she moved there in the 1960s. Influenced by both Whitman and Thoreau, she is known for her clear and poignant observances of the natural world. Her creativity is stirred by nature, and Oliver, an avid walker, often pursues inspiration on foot.

Her poems are filled with imagery from her daily walks near her home: shore birds, water snakes, the phases of the moon and humpback whales. In Long life she says "go off to my woods, my ponds, my sun-filled harbor, no more than a blue comma on the map of the world but, to me, the emblem of everything.

"She commented in a rare interview "When things are going well, you know, the walk does not get rapid or get anywhere: I finally just stop, and write. That's a successful walk!" She says that she once found herself walking in the woods with no pen and later hid pencils in the trees so she would never be stuck in that place again.

She often carries a 3-by-5-inch hand-sewn notebook for recording impressions and phrases. Maxine Kumin calls Oliver "a patroller of wetlands in the same way that Thoreau was an inspector of snowstorms."

Oliver has also been compared to Emily Dickinson, with whom she shares an affinity for solitude and inner monologues. Her poetry combines dark introspection with joyous release. Although she has been criticized for writing poetry that assumes a dangerously close relationship of women with nature, she finds the self is only strengthened through an immersion with nature.

Oliver is also known for her unadorned language and accessible themes. The Harvard Review describes her work as an antidote to "inattention and the baroque conventions of our social and professional lives. She is a poet of wisdom and generosity whose vision allows us to look intimately at a world not of our making."