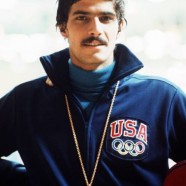 Mark Andrew Spitz (born February 10, 1950) is an American former competitive swimmer, nine-time Olympic champion, and former world record-holder in seven events. He won seven gold medals at the 1972 Summer Olympics in Munich, an achievement surpassed only by Michael Phelps, who won eight golds at the 2008 Summer Olympics in Beijing. Spitz set new world records in all seven events in which he competed in 1972. Spitz holds more medals than any other Jew in the history of the Olympics.

Between 1968 and 1972, Spitz won nine Olympic golds, a silver, and a bronze; five Pan American golds; 31 Amateur Athletic Union (AAU) titles; and eight National Collegiate Athletic Association (NCAA) titles. During those years, he set 35 world records, but two were in trials and unofficial.

He was named World Swimmer of the Year in 1969, 1971, and 1972 by Swimming World Magazine. He was the third athlete to win nine Olympic gold medals.