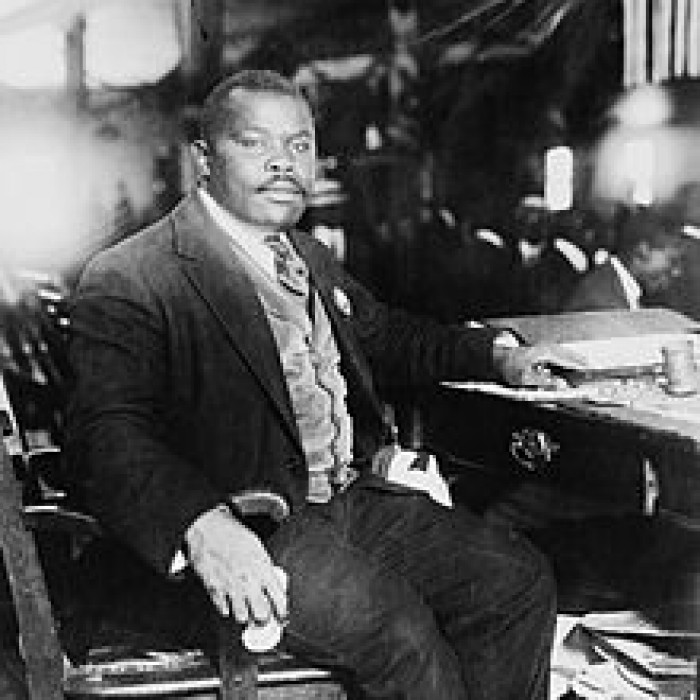 Marcus Mosiah Garvey, (17 August 1887 – 10 June 1940),  was a Jamaican political leader, publisher, journalist, entrepreneur, and orator who was a proponent of the Pan-Africanism movement, to which end he founded the Universal Negro Improvement Association and African Communities League (UNIA-ACL).

He also founded the Black Star Line, a shipping and passenger line which promoted the return of the African diaspora to their ancestral lands. Prior to the 20th century, leaders such as Prince Hall, Martin Delany, Edward Wilmot Blyden, and Henry Highland Garnet advocated the involvement of the African diaspora in African affairs.

Garvey was unique in advancing a Pan-African philosophy to inspire a global mass movement and economic empowerment focusing on Africa known as Garveyism. Promoted by the UNIA as a movement of African Redemption, Garveyism would eventually inspire others, ranging from the Nation of Islam to the Rastafari movement.

Garveyism intended persons of African ancestry in the diaspora to "redeem" the nations of Africa and for the European colonial powers to leave the continent. His essential ideas about Africa were stated in an editorial in Negro World entitled "African Fundamentalism", where he wrote: "Our union must know no clime, boundary, or nationality… to let us hold together under all climes and in every country.

His family was financially stable given the circumstances of this time period. Garvey's father had a large library, and it was from his father that Marcus gained his love for reading.

After corresponding with Booker T. Washington, head of the Tuskegee Institute in Alabama and a national African-American leader in the United States, Garvey traveled by ship to the U.S., arriving on 23 March 1916 aboard the SS Tallac. He intended to make a lecture tour and to raise funds to establish a school in Jamaica modeled after Washington's Institute.

After moving to New York, he found work as a printer by day. He was influenced by Hubert Harrison. At night he would speak on street corners, much as he did in London's Hyde Park. Garvey thought there was a leadership vacuum among African Americans.On 9 May 1916, he held his first public lecture in New York City at St Mark's Church in-the-Bowery and undertook a 38-state speaking tour.

Garvey was given major prominence as a national hero during Jamaica's move towards independence. As such, he has numerous tributes there. The first of these is the Garvey statue and shrine in Kingston's National Heroes Park.

Among the honors to him in Jamaica are his name upon the Jamaican Ministry of Foreign Affairs; a major highway bearing his name and the Marcus Garvey Scholarship tenable at the University of the West Indies sponsored by The National Association of Jamaican and Supportive Organizations, Inc (NAJASO) since 1988.