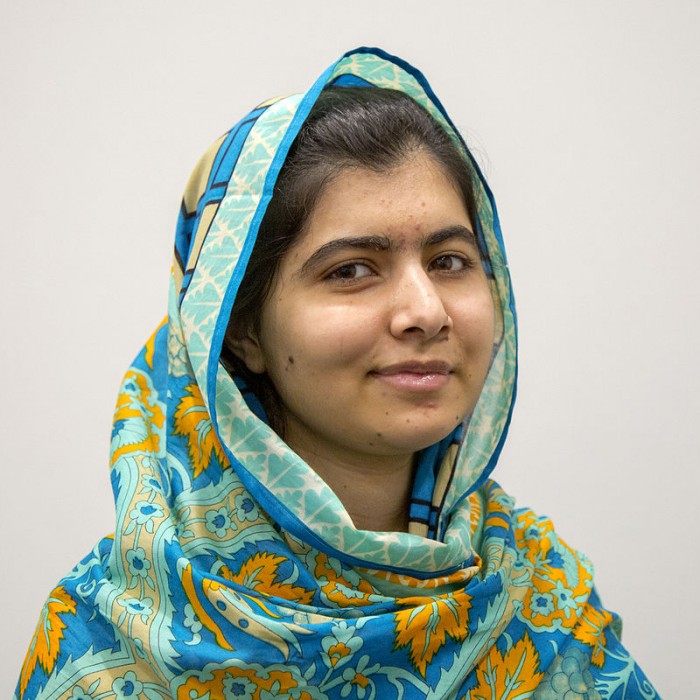 Malala Yousafzai (born 12 July 1997) is a Pakistani activist for female education and the youngest-ever Nobel Prize laureate. She is known for human rights advocacy, especially education of women in her native Swat Valley in Khyber Pakhtunkhwa, northwest Pakistan, where the local Taliban had at times banned girls from attending school. Her advocacy has since grown into an international movement.

Yousafzai was born in Swat District, Pakistan. Her family came to run a chain of schools in the region. In early 2009, when she was 11–12, she wrote a blog under a pseudonym for the BBC Urdu detailing her life during the Taliban occupation of Swat. The following summer, journalist Adam B. Ellick made a New York Times documentary[2] about her life as the Pakistani military intervened in the region. She rose in prominence, giving interviews in print and on television, and she was nominated for the International Children's Peace Prize by activist Desmond Tutu.

On the afternoon of 9 October 2012, Yousafzai was injured after a Taliban gunman attempted to murder her. Yousafzai remained unconscious, in critical condition at the Rawalpindi Institute of Cardiology, but later her condition improved enough for her to be sent to the Queen Elizabeth Hospital in Birmingham, UK.

The murder attempt sparked a national and international outpouring of support for Yousafzai. Deutsche Welle wrote in January 2013 that she may have become "the most famous teenager in the world."Weeks after her murder attempt, a group of fifty leading Muslim clerics in Pakistan issued a fatwā against those who tried to kill her.

Since recovering, Yousafzai became a prominent education activist. Based out of Birmingham, she founded the Malala Fund, a non-profit and in 2013 co-authored I am Malala, an international bestseller.[8] In 2015, Yousafzai was a subject of the Oscar-shortlisted documentary He Named Me Malala.

The 2013, 2014 and 2015 issues of Time magazine featured her as one of the most Influential people globally. In 2012, she was the recipient of Pakistan's first National Youth Peace Prize and the 2013 Sakharov Prize. In 2014, she was announced as the co-recipient of the 2014 Nobel Peace Prize, along with Kailash Satyarthi, for her struggle against the suppression of children and young people and for the right of all children to education.

Aged 17 at the time, she became the youngest-ever Nobel Prize laureate. Since March 2013, she has been a pupil at the all-girls' Edgbaston High School in Birmingham. In 2017, she was awarded honorary Canadian citizenship and became the youngest person to address the House of Commons of Canada.

Yousafzai has been awarded the following national and international honours: