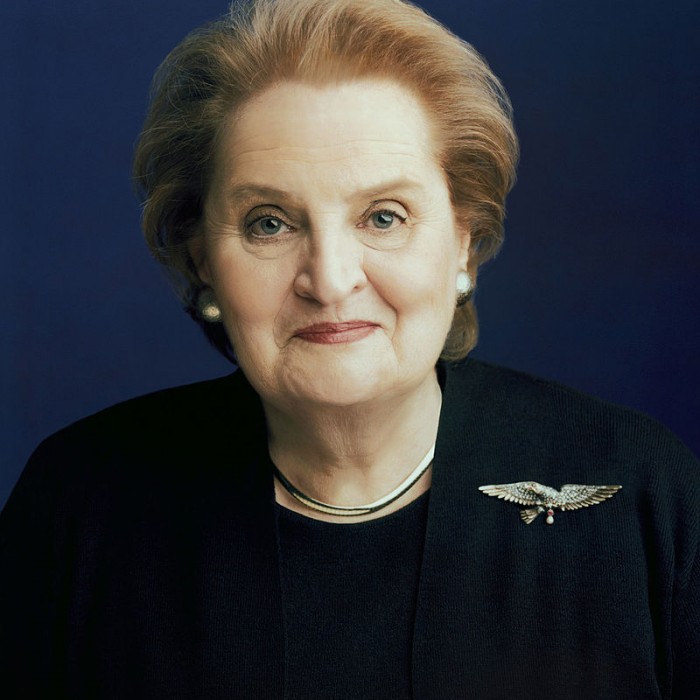 Madeleine Jana Korbel Albright (born Marie Jana Korbelová; May 15, 1937) is an American politician and diplomat. She is the first woman to have become the United States Secretary of State. She was nominated by U.S. President Bill Clinton on December 5, 1996, and was unanimously confirmed by a U.S. Senate vote of 99–0. She was sworn in on January 23, 1997.

Albright currently serves as chair of Albright Stonebridge Group and as a professor of International Relations at Georgetown University's School of Foreign Service. She holds a PhD from Columbia University and numerous honorary degrees. In May 2012, she was awarded the Presidential Medal of Freedom by U.S. President Barack Obama. Secretary Albright also serves as a director on the board of the Council on Foreign Relations.

Albright returned to Washington, D.C., in 1968, and commuted to Columbia for her PhD degree, which she received in 1975. She began fund-raising for her daughters' school, involvement which led to several positions on education boards. She was eventually invited to organize a fund-raising dinner for the 1972 presidential campaign of U.S. Senator Ed Muskie of Maine.

This association with Muskie led to a position as his chief legislative assistant in 1976. However, after the 1976 U.S. presidential election of Jimmy Carter, Albright's former professor Brzezinski was named National Security Advisor, and recruited Albright from Muskie in 1978 to work in the West Wing as the National Security Council's congressional liaison.

Following Carter's loss in 1980 to Ronald Reagan, Albright moved on to the Woodrow Wilson International Center for Scholars at the Smithsonian Institution in Washington, D.C., where she was given a grant for a research project. She chose to write on the dissident journalists involved in Poland's Solidarity movement, then in its infancy but gaining international attention.

She traveled to Poland for her research, interviewing dissidents in Gdańsk, Warsaw and Kraków. Upon her return to Washington, her husband announced his intention to divorce her for another woman.

Albright joined the academic staff at Georgetown University in Washington, D.C., in 1982, specializing in Eastern European studies. She also directed the university's program on women in global politics. She served as a major Democratic Party foreign policy advisor, briefing Vice-Presidential candidate Geraldine Ferraro in 1984 and Presidential candidate Michael Dukakis in 1988 (both campaigns ended in defeat).

In 1992, Bill Clinton returned the White House to the Democratic Party, and Albright was employed to handle the transition to a new administration at the National Security Council. In January 1993, Clinton nominated her to be U.S. Ambassador to the United Nations, her first diplomatic posting.