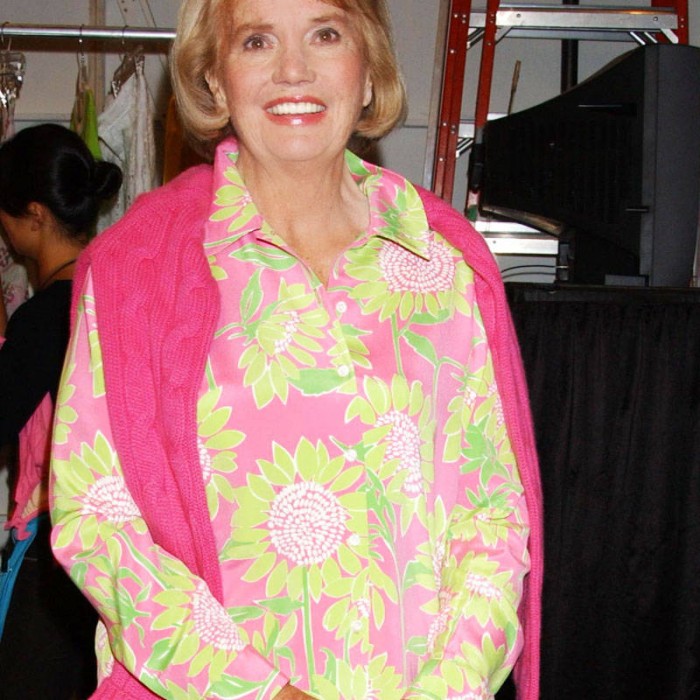 Lillian Pulitzer Rousseau (born Lillian Lee McKim; November 10, 1931 – April 7, 2013), better known as Lilly Pulitzer, was an American socialite and fashion designer. She founded Lilly Pulitzer, Inc., which produces clothing and other such wares featuring bright, colorful, floral prints. As the brand is popular with high society, she was called the "Queen of Prep".

Lilly and husband Peter Pulitzer settled in Palm Beach, Florida, shortly after their marriage. Born to an heiress of the Standard Oil fortune, she married Herbert Pulitzer Jr. (known as Peter), the grandson of Joseph Pulitzer—the publisher synonymous with the Pulitzer Prize.

They owned several Florida citrus orange groves and with produce from the groves, she opened a juice stand on Via Mizner, just off Worth Avenue in Palm Beach. In the course of working at the juice stand, Pulitzer found that squeezing juice made a mess of her clothes. Seeking to camouflage the juice stains, she designed a sleeveless shift dress made of bright, colorful printed cotton.

She found out that customers loved her dress, so she produced more in order to sell them at her juice stand. Eventually, she was selling more dresses than juice, and decided to focus on designing and selling what had become known as her "Lillys".

In 1959, Pulitzer became president of her own company, Lilly Pulitzer, Inc. The company's main factory was located in Miami, Florida and the fabrics were produced by the Key West Hand Print Fabrics company in Key West.

From the 1960s to the early 1980s, Pulitzer's bright, colorful clothes were very popular, worn by elites such as Jacqueline Kennedy Onassis, Caroline Kennedy, and members of the Rockefeller, Vanderbilt and Whitney families. Lilly Pulitzer was a former classmate of Jackie's. After Jackie was featured in Life magazine donning one of Lilly's famous shifts, many preppy ladies followed her lead.

The Jacqueline dress is one of Lilly Pulitzer's most successful styles. By 1984, Lilly closed down the entire clothing operation. Lilly later stated that the first shift dress her former classmate, Jacqueline Kennedy Onassis, was photographed in was in fact made of kitchen curtains.