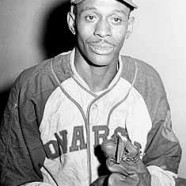 Leroy Robert "Satchel" Paige (July 7, 1906 – June 8, 1982) was an American Negro league baseball and Major League Baseball (MLB) pitcher who became a legend in his own lifetime by being known as perhaps the best pitcher in baseball history, by his longevity in the game, and by attracting record crowds wherever he pitched.

Paige was a right-handed pitcher, and at age 42 in 1948, he was the oldest major league rookie while playing for the Cleveland Indians. He played with the St. Louis Browns until age 47, and represented them in the All-Star Game in 1952 and 1953.

He was the first player who had played in the Negro leagues to pitch in the World Series, in 1948, and was the first electee of the Committee on Negro Baseball Leagues to be inducted in the National Baseball Hall of Fame, in 1971.

Paige first played for the semi-professional Mobile Tigers from 1924 to 1926.