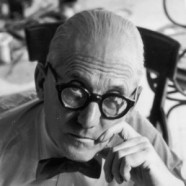 Charles Edouard Jeanneret Gris  who was known as "Le Corbusier" (this pseudonym adopted in 1920 when he moved in france ) was born on october 6, 1887 in switzerland,  was a Swiss-French architect .

-Le Corbusier was a designer, painter, urban-planner and the writer who was one of the poineer of what is now called "Modern-Architecture".

-In 1917; he moved in France in order to continue his career as an architect,  So in 1930, he became a french citizen who spent his time to modern painting , the decorative art and the different  design of urbanism-plan.

-Le Corbusier was a fouanding memeber of the "Congrès International D'architecture Moderne" who has given a new technique in architecture that was "The Five Points of Architecture" where he lifted the bulk of the structure off the ground  supporting it by pilotis reinforced concrets stilts.

-Le Corbusier realized a several buildings , the most popular are :

* Carpenter centerfor the  Visual Arts in 1962 At Havard -University Combridge.

-Le Corbusier received th AIA Gold Medal and the Frank P Brown Medal in 1961. Besides the university of Cambridge awarded Le Corbusier  an honorary degree in 1959.

-Le C ourbisier died on august 27, 1965 at the age of 77 years because of  drowning in the Mediterranean- Sea  at Roquebrune-Cap-Martin-France.