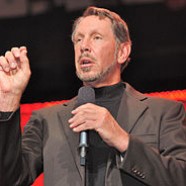 He serves as executive chairman and chief technology officer of Oracle Corporation, having previously been chief executive from its founding until September 2014. In 2014, he was listed by Forbes magazine as the third-wealthiest man in America and as the fifth-wealthiest person in the world, with a fortune of US$56.2 billion.