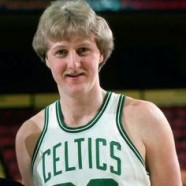 Larry Joe Bird (born December 7, 1956) is an American retired professional basketball player who played for the Boston Celtics of the National Basketball Association (NBA). Since retiring as a player, he has been a mainstay in the Indiana Pacers organization, currently serving as team president. Drafted into the NBA sixth overall by the Boston Celtics in 1978, Bird started at small forward and power forward for thirteen seasons, spearheading one of the NBA's most formidable frontcourts that included center Robert Parish and forward Kevin McHale.