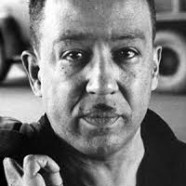 He was one of the earliest innovators of the then-new literary art form called jazz poetry. Hughes is best known as a leader of the Harlem Renaissance in New York City.

He famously wrote about the period that "the negro was in vogue", which was later paraphrased as "when Harlem was in vogue".