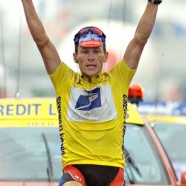 Lance Edward Armstrong (born September 18, 1971) is an American former professional road racing cyclist. He is the 1993 Elite Men's Road Race World Champion, and he had won the Tour de France seven consecutive times from 1999 to 2005, but was stripped of his Tour de France victories in 2012 after a protracted doping scandal.

At age 16, Armstrong began competing as a triathlete and was a national sprint-course triathlon champion in 1989 and 1990. In 1992, Armstrong began his career as a professional cyclist with the Motorola team. He had notable success between 1993 and 1996, including the World Championship in 1993, Clásica de San Sebastián in 95, Tour DuPont in 95 and 96, and a handful of stage victories in Europe, including stage 18 of the 1995 Tour de France. In 1996, he was diagnosed with a potentially fatal metastatic testicular cancer. After his recovery, he founded the Lance Armstrong Foundation (now the Livestrong Foundation) to assist other cancer survivors.