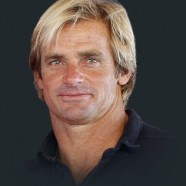 Laird Hamilton is a famous American professional big wave surfer. Born on March 2nd 1964, he has mastered the art of versatility. Hamilton performs a wide variety of other roles in addition to surfing. He is also a stunt man, inventor, author, producer, TV host, model, fitness guide and nutrition expert too. He is married to professional volleyball star Gabrielle Reece and they have some beautiful daughters together. The family alternates between their residences in Malibu, California and Hawaii. Already in his fifties, Laird Hamilton wows the world with his physique and professional accomplishments too. He is recognized as the ultimate “Water Man” of today.

Laird Hamilton was born in San Francisco but he grew up in the North Shore. He was born as Laird John Zerfas. His father was a Grecian who moved to California. Unfortunately, he left Laird and his mother when the boy was only 1 year old. Young Laird spent most of his free time at the Pipeline beach. There, he got to interact and watch the feats of the last original big wave surfers such as Jose Angel, Greg Noll and Butch Van Artsdalen. He observed and adopted their bravado and skill in the water. Later on, Laird's mother moved to Hawaii and met the famous professional big wave surfer Billy Hamilton. The professional adopted young Laird and gave him his last name.

Laird went to school in Hawaii. He was one of the very few blonds in his classes. Therefore, he experienced constant racial abuse. To survive, Hamilton had to be on guard at all times and this helped him to develop the skill of constant awareness. He also took to the ocean to release his frustrations on the big waves. Eventually, he was done with formal education at the age of 17 and decided to move to California. While there, he used his once-rejected looks to create his own brand. Laird began modeling after being discovered by a photographer for L'Uomo Vogue which is the Italian version of Men's Vogue. In 1983, he landed his first big modeling shoot alongside famous actress Brooke Shields.

Laird Hamilton was a skilled surfer very early in his life. However, he did not like formal competition. Instead of attending arranged surfing events, he preferred to compete unofficially against other enthusiastic surfers at the Backdoor and Pipe beach locations in California. Soon after beginning this rebellious approach, he made a name for himself that even competition winners respected. He was known for his bravado and high level of aggression. Soon, he had mastered how to surf waves of regular sizes and was eager to try the biggest waves around.

Laird Hamilton transferred his attention to the outer reefs of the North Shore. There, he could find the biggest waves on the California beach. He began the practice of using a Jet Ski to tow right into waves that were too big to catch with just his board. He mastered this new approach and transferred it to the big wave capital, Peahi beach in Maui, Hawaii. The reef has waves that are over a hundred feet tall which were considered impossible to surf, until Laird Hamilton arrived.

Making waves of his own

Alongside his crew, he conquered every big wave that rolled into the Peahi beach. Observers, fans and enthusiasts were amazed at his skill and bravery while surfing. Laird Hamilton redesigned the big wave surf board, beat every other surfer on the unridden waves and created a debate among the purists of surfing. They were against using Jet Skis to ride into big waves. On the other hand, enthusiasts were supportive of Laird's methods due to the fantastic performances he gave.

Despite the controversy that he started, everyone agreed that Laird Hamilton was a professional, skilled and highly talented surfer. He cemented this position on August 17th 2000 when he surfed the biggest wave to date. It was a Teahupoo ledge wave that was hundreds of feet high. Laird rode through it masterfully and survived.

Being a high energy individual, Laird is always performing some interesting activities when away from the beach. He occupies his time inventing water sport toys, writing a column in “Men's Journal”, working out and developing nutrition guides for other athletes. Laird has appeared on the television and movie scene many times too. He has been called upon for guidance in big budget movies such as the Bond film “Die Another Day” (2002) and “Point Break”(2015). Moreover, he has starred in documentaries such as “Riding Giants” (2004) and “Step into Liquid” (2003).

Laird Hamilton is one of the top surfers of his generation. Celebrities and surfing enthusiasts recognize him as the best. He is a philanthropist and works with organizations such as Race Across America, Rain Catcher and the Surfrider Foundation. With his wife and daughters at his side, Laird has conquered the oceans and laid beaches across the world at his feet.