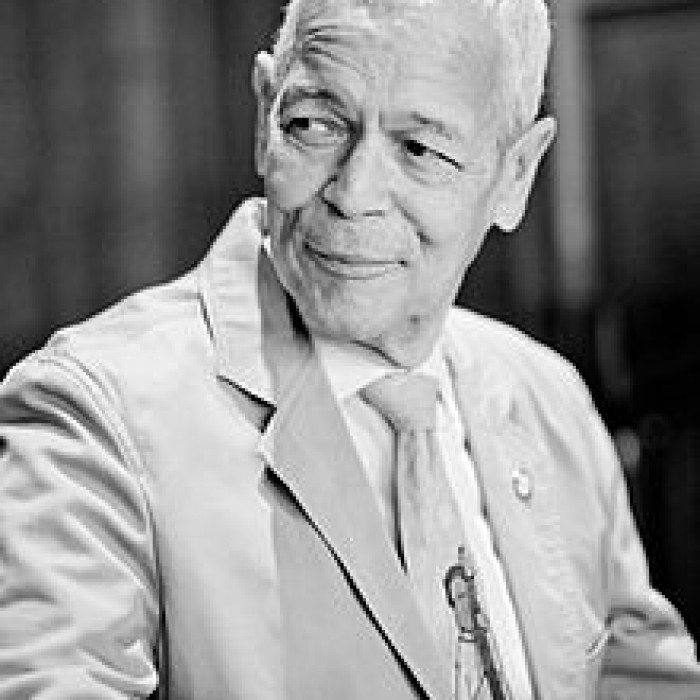 Horace Julian Bond (January 14, 1940 – August 15, 2015) was an American social activist and leader in the Civil Rights Movement, politician, professor and writer. While a student at Morehouse College in Atlanta, Georgia, during the early 1960s, he helped to establish the Student Nonviolent Coordinating Committee (SNCC).

Bond was elected to four terms in the Georgia House of Representatives and later to six terms in the Georgia State Senate, serving a combined twenty years in both legislative chambers. From 1998 to 2010, he was chairman of the National Association for the Advancement of Colored People (NAACP) and the first president of the Southern Poverty Law Center.

Bond was born at Hubbard Hospital in Nashville, Tennessee, to parents Julia Agnes (Washington) and Horace Mann Bond. His father was an educator who went on to serve as the president of Lincoln University. His mother, Julia, was a former librarian at Clark Atlanta University. At the time, the family resided on campus at Fort Valley State College, where Horace was president.

In 1965, Bond was one of eleven African Americans elected to the Georgia House of Representatives after passage of the Civil Rights Act of 1964 and Voting Rights Act of 1965 had opened voter registration to blacks. By ending the disfranchisement of blacks through discriminatory voter registration, African Americans regained the ability to vote and entered the political process.

Former Governor Ellis Arnall polled more than fifty thousand votes as a write-in candidate, a factor which led to the impasse. Bond would not support either Maddox or Callaway, although he was ordered to vote by lame duck Lieutenant GovernorPeter Zack Geer.

Bond became the first president of the Southern Poverty Law Center in 1971. He served until 1979, remaining a board member and president emeritus for the rest of his life.

In 1998, Bond was selected as chairman of the NAACP. In November 2008, he announced that he would not seek another term as chairman. Bond agreed to stay on in the position through 2009, as the organization celebrated its 100th anniversary. Roslyn M. Brock was chosen as Bond's successor on February 20, 2010.