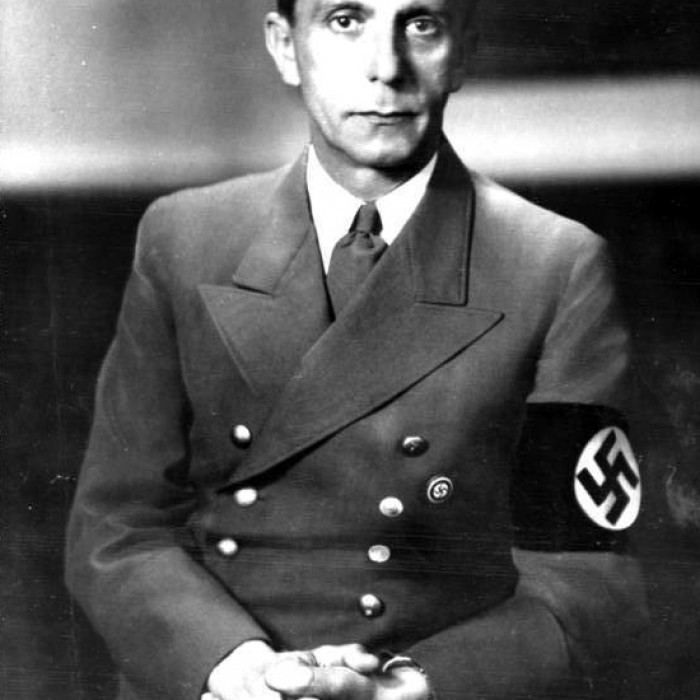 Paul Joseph Goebbels (29 October 1897 – 1 May 1945) was a German politician and Reich Minister of Propaganda of Nazi Germany from 1933 to 1945. He was one of Adolf Hitler's close associates and most devoted followers, and was known for his skills in public speaking and his deep, virulent antisemitism, which was evident in his publicly voiced views. He advocated progressively harsher discrimination, including the extermination of the Jews in the Holocaust.

Goebbels, who aspired to be an author, obtained a Doctor of Philosophy degree from the University of Heidelberg in 1921. He joined the Nazi Party in 1924, and worked with Gregor Strasser in their northern branch. He was appointed as Gauleiter (district leader) for Berlin in 1926, where he began to take an interest in the use of propaganda to promote the party and its programme.

After the Nazi Seizure of Power in 1933, Goebbels' Propaganda Ministry quickly gained and exerted controlling supervision over the news media, arts, and information in Germany. He was particularly adept at using the relatively new media of radio and film for propaganda purposes. Topics for party propaganda included antisemitism, attacks on the Christian churches, and (after the start of the Second World War) attempting to shape morale.

In 1943, Goebbels began to pressure Hitler to introduce measures that would produce total war, including closing businesses not essential to the war effort, conscripting women into the labour force, and enlisting men in previously exempt occupations into the Wehrmacht. Hitler finally appointed him as Reich Plenipotentiary for Total War on 23 July 1944, whereby Goebbels undertook largely unsuccessful measures to increase the number of people available for armaments production and the Wehrmacht.

As the war drew to a close and Nazi Germany faced defeat, Magda Goebbels and the Goebbels children joined him in Berlin. They moved into the underground Vorbunker, part of Hitler's underground bunker complex, on 22 April 1945. Hitler committed suicide on 30 April. In accordance with Hitler's will, Goebbels succeeded him as Chancellor of Germany; he served one day in this post. The following day, Goebbels and his wife committed suicide, after poisoning their six children with cyanide.