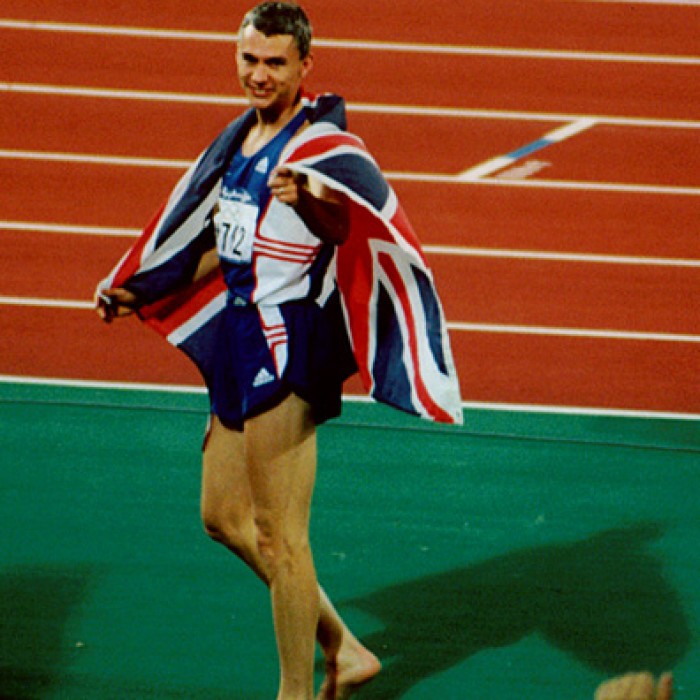 Jonathan David Edwards, CBE (born 10 May 1966 in Westminster, London) is a former triple jumper. He is a former Olympic, World, Commonwealth and European champion, and has held the world record in the event since 1995.

Due to his strong Christian beliefs during his athletic career, discussed in more detail below, he initially refused to compete on Sundays, but eventually decided to do so in 1993. This decision proved timely, since the qualifying round at that year's World Championships took place on a Sunday. He went on to win the bronze medal.

In his breakthrough year of 1995, Edwards produced a jump of 18.43 m (60 feet  5 1⁄2 inches) at the European Cup. The leap was wind assisted and did not count for record purposes, but it was a sign of things to come as he capped an unbeaten year with a historic gold medal performance at the World Championships, in which he broke the world record twice in the same meeting.

On his first jump, he became the first man to legally pass the 18-metre barrier with a jump of 18.16 m (59 feet 7 inches). That record lasted for about 20 minutes. His second jump of 18.29 m made him the first to jump 60 feet. During his commentary for the 2008 Summer Olympics, Edwards observed that during the 1995 World Championships, he felt as if "he could jump as far as he needed to". Later the same year Edwards became the BBC Sports Personality of the Year.

During 1996 Edwards went into the Olympic Games as favourite and world record holder, but it was American Kenny Harrison who took the gold with a jump of 18.09 m. Edwards walked away with the silver after a leap of 17.88 m (the longest ever jump not to win gold). Edwards won the gold medal at the 2000 Olympic Games, and was appointed a CBE shortly afterwards.

Following his retirement as an athlete, Edwards has worked as a sports (primarily athletics) commentator and presenter for BBC television. Formerly a devout Christian, he also presented episodes of the BBC Christian worship programme Songs of Praise, until he renounced his faith in 2007.

In 2011 he was elected President of Wenlock Olympian Society following the death of its then President, Roy Rogers. He was a member of the London Organising Committee of the Olympic and Paralympic Games for the 2012 games.