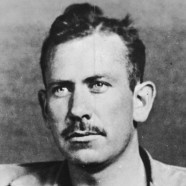 The Pulitzer Prize-winning The Grapes of Wrath (1939) is considered Steinbeck's masterpiece and part of the American literary canon.

In the first 75 years after it was published, it sold 14 million copies.