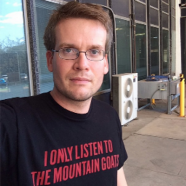 John Michael Green (born August 24, 1977) is an American author of young adult fiction. He won the 2006 Printz Award for his debut novel, Looking for Alaska, and his sixth novel, The Fault in Our Stars, debuted at number one on The New York Times Best Seller list in January 2012. The 2014 film adaptation opened at number one on the box office. In 2014, Green was included in Time magazine's list of The 100 Most Influential People in the World. Another film based on a Green novel, Paper Towns, was released on July 24, 2015.

Aside from being a novelist, Green is also well known for his YouTube ventures. In 2007, he launched the VlogBrothers channel with his brother, Hank Green. Since then, John and Hank have launched events such as Project for Awesome and VidCon and created a total of 11 online series, including Crash Course, an educational channel teaching literature, history, and science, later joined by courses in economics, US government, astronomy, and politics.

After graduating from college, Green spent five months working as a student chaplain at Nationwide Children's Hospital in Columbus, Ohio while enrolled at the University of Chicago Divinity School (although he never actually attended the school).

He intended to become an Episcopal priest, but his experiences of working in a hospital with children suffering from life-threatening illnesses inspired him to become an author, and later to write The Fault in Our Stars.

Green's first novel, Looking for Alaska, published by Dutton Children's Books in 2005, is a school story and teen romance inspired by his experiences at Indian Springs, fictionalized as Culver Creek Preparatory High School.