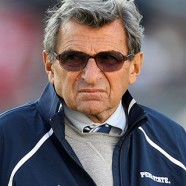 Joseph Vincent "Joe" Paterno (December 21, 1926 – January 22, 2012), sometimes referred to as "JoePa", was an American college football player, and later athletic director and coach. He was the head coach of the Penn State Nittany Lions from 1966 to 2011. With 409 victories, Paterno was the most successful coach in NCAA FBS history. His career ended with his dismissal from the team in November, 2011 as a result of the Penn State child sex abuse scandal.