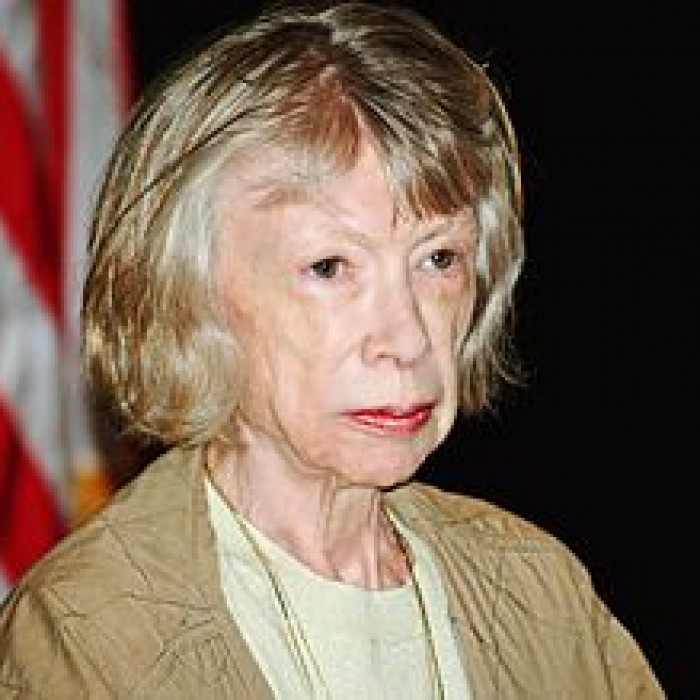 Joan Didion (born December 5, 1934) is an American author best known for her novels and her literary journalism. Her novels and essays explore the disintegration of American morals and cultural chaos, where the overriding theme is individual and social fragmentation. A sense of anxiety or dread permeates much of her work.

Joan Didion was born and raised in Sacramento, California, to parents Frank Reese and Eduene (née Jerrett) Didion. Didion recalls writing things down as early as age five, though she claims that she never saw herself as a writer until after being published.

As a child, Didion attended kindergarten and first grade, although, because her father was in the Army Air Corps during World War II and her family was constantly being relocated, she did not attend school on a regular basis.

In 1956, Didion graduated from the University of California, Berkeley with a Bachelor of Arts degree in English. During her senior year, she won first place in an essay contest sponsored by Vogue, and was awarded a job as a research assistant at the magazine.

In 2007, Didion received the National Book Foundation's annual Medal for Distinguished Contribution to American Letters. From the citation: "An incisive observer of American politics and culture for more than forty-five years, her distinctive blend of spare, elegant prose and fierce intelligence has earned her books a place in the canon of American literature as well as the admiration of generations of writers and journalists." This same year, Didion also won the Evelyn F. Burkey Award from the Writers Guild of America.

On July 3, 2013 the White House announced Didion as one of the recipients of the National Medals of Arts and Humanities, to be presented by President Barack Obama. In 2010 Didion had complained that under Obama the U.S. had become "an irony-free zone".