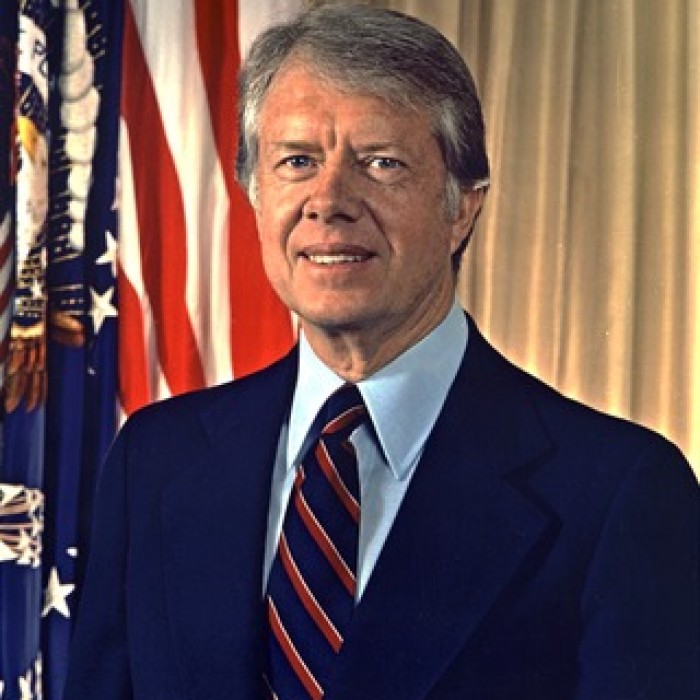 James Earl "Jimmy" Carter Jr. (born October 1, 1924) is an American politician who served as the 39th President of the United States from 1977 to 1981. A member of the Democratic Party, he served as the Governor of Georgia prior to his election as president. Carter has remained active in public life during his post-presidency, and in 2002 he was awarded the Nobel Peace Prize for his work with the Carter Center.

Carter joined the United States Navy after graduating high school, serving on nuclear submarines. He left the Navy in 1953 to return to Georgia, where he worked as a peanut farmer. From 1963 to 1967, Carter served in the Georgia State Senate. In 1970, Carter won election as Governor of Georgia, defeating former Governor Carl Sanders in the Democratic primary. He served as governor from 1971 to 1975.

Despite being little-known outside of Georgia at the start of the campaign, Carter won the 1976 Democratic presidential nomination. In the general election, Carter defeated incumbent Republican President Gerald Ford in a relatively close election.

On his second day in office, Carter pardoned all evaders of the Vietnam War drafts. During Carter's term as President, two new cabinet-level departments, the Department of Energy and the Department of Education, were established. He established a national energy policy that included conservation, price control, and new technology. In foreign affairs, Carter pursued the Camp David Accords, the Panama Canal Treaties, the second round of Strategic Arms Limitation Talks (SALT II), and the return of the Panama Canal Zone to Panama.

On the economic front he confronted persistent "stagflation", a combination of high inflation, high unemployment and slow growth. The end of his presidential tenure was marked by the 1979–1981 Iran hostage crisis, the 1979 energy crisis, the Three Mile Island nuclear accident, and the Soviet invasion of Afghanistan. In response to the invasion, Carter ended détente, escalated the Cold War, and led the international boycott of the 1980 Summer Olympics in Moscow.

In 1980, Carter faced a primary challenge from Senator Ted Kennedy, but Carter won re-nomination at the 1980 Democratic National Convention. Carter lost the general election in an electoral landslide to Republican nominee Ronald Reagan. Polls of historians and political scientists usually rank Carter as a below average president.

In 2012, he surpassed Herbert Hoover as the longest-retired president in U.S. history, and he is also the first president to mark the 40th anniversary of his inauguration. He set up the Carter Center in 1982 as his base for advancing human rights. He has also traveled extensively to conduct peace negotiations, observe elections, and advance disease prevention and eradication in developing nations. Additionally, Carter is a key figure in the Habitat for Humanity project and he has written several books about various topics. In reference to current political views, he has criticized some of Israel's actions and policies in regards to the Israeli–Palestinian conflict and has advocated for a two-state solution.

He has vigorously opposed the Supreme Court's decision in Citizens United v. FEC to strike down limits on campaign spending by corporations and unions, saying that the U.S. is "no longer a functioning democracy" and now has a system of "unlimited political bribery."