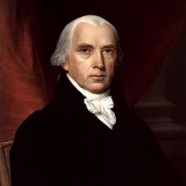 James Madison was Born on March 16, 1751, in Port Conway, Virginia, James Madison wrote the first drafts of the U.S. Constitution, co-wrote the Federalist Papers and sponsored the Bill of Rights.

He established the Democrat-Republican Party with President Thomas Jefferson, and became president himself in 1808. Madison initiated the War of 1812, and served two terms in the White House with first lady Dolley Madison. He died on June 28, 1836, at the Montpelier estate in Orange County, Virginia