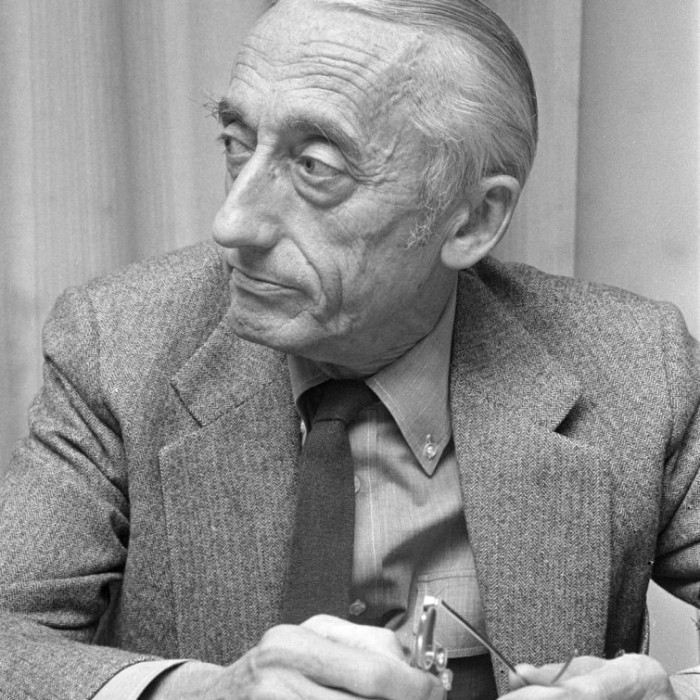 Jacques-Yves Cousteau AC (commonly known in English as Jacques Cousteau; 11 June 1910 – 25 June 1997) was a French naval officer, explorer, conservationist, filmmaker, innovator, scientist, photographer, author and researcher who studied the sea and all forms of life in water. He co-developed the Aqua-lung, pioneered marine conservation and was a member of the Académie française.

Cousteau described his underwater world research in a series of books, perhaps the most successful being his first book, The Silent World: A Story of Undersea Discovery and Adventure, published in 1953.

Cousteau also directed films, most notably the documentary adaptation of the book, The Silent World, which won a Palme of or at the 1956 Cannes Film Festival. He remained the only person to win a Palme d'Or for a documentary film, until Michael Moore won the award in 2004 for Fahrenheit 9/11.

In November 1991, Cousteau gave an interview to the UNESCO Courier, in which he stated that he was in favour of human population control and population decrease. Widely quoted on the Internet are these two paragraphs from the interview: "What should we do to eliminate suffering and disease?

It's a wonderful idea but perhaps not altogether a beneficial one in the long run. If we try to implement it we may jeopardize the future of our species...It's terrible to have to say this. World population must be stabilized and to do that we must eliminate 350,000 people per day. This is so horrible to contemplate that we shouldn't even say it. But the general situation in which we are involved is lamentable".

In 1992, he was invited to Rio de Janeiro, Brazil, for the United Nations' International Conference on Environment and Development, and then he became a regular consultant for the UN and the World Bank.

In 1996, he sued his son who wished to open a holiday center named "Cousteau" in the Fiji Islands.

On 11 January 1996, Calypso was rammed and sunk in Singapore Harbor by a barge. The Calypso was refloated and towed home to France.