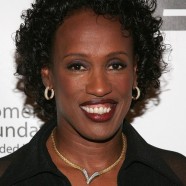 Jacqueline "Jackie" Joyner-Kersee (born March 3, 1962) is an American retired track and field athlete, ranked among the all-time greatest athletes in the women's heptathlon as well as in the women's long jump. She won three gold, one silver, and two bronze Olympic medals, in those two events at four different Olympic Games. Sports Illustrated for Women magazine voted Joyner-Kersee the Greatest Female Athlete of All-Time, just ahead of Babe Didrikson Zaharias.

After retiring as a competitive athlete, Joyner-Kersee has been involved with many philanthropic efforts and has joined the Board of Directors for USA Track & Field (USATF), the national governing body of the sport.

Joyner-Kersee is one of the most famous athletes to have overcome severe asthma.