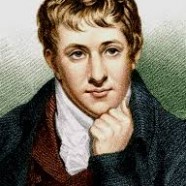 Sir Humphry Davy, 1st Baronet PRS MRIA FGS (17 December 1778 – 29 May 1829) was a Cornish chemist and inventor, who is best remembered today for his discoveries of several alkali and alkaline earth metals, as well as contributions to the discoveries of the elemental nature of chlorine and iodine.

Berzelius called Davy's 1806 Bakerian Lecture On Some Chemical Agencies of Electricity "one of the best memoirs which has ever enriched the theory of chemistry."