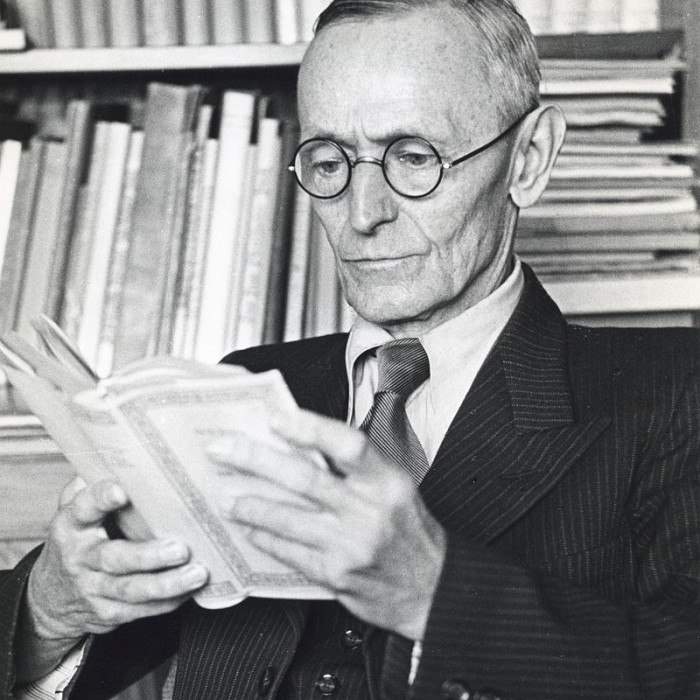 Hermann Karl Hesse (2 July 1877 – 9 August 1962) was a German-born Swiss poet, novelist, and painter. His best-known works include Demian, Steppenwolf, Siddhartha, and The Glass Bead Game, each of which explores an individual's search for authenticity, self-knowledge and spirituality. In 1946, he received the Nobel Prize in Literature.

On 17 October 1895, Hesse began working in the bookshop in Tübingen, which had a specialized collection in theology, philology, and law. Hesse's tasks consisted of organizing, packing, and archiving the books.

After the end of each twelve-hour workday, Hesse pursued his own work, and he spent his long, idle Sundays with books rather than friends. Hesse studied theological writings and later Goethe, Lessing, Schiller, and Greek mythology.

He also began reading Nietzsche in 1895, and that philosopher's ideas of "dual...impulses of passion and order" in humankind was a heavy influence on most of his novels.

By 1898, Hesse had a respectable income that enabled financial independence from his parents.[citation needed] During this time, he concentrated on the works of the German Romantics, including much of the work from Clemens Brentano, Joseph Freiherr von Eichendorff, Friedrich Hölderlin, and Novalis. In letters to his parents, he expressed a belief that "the morality of artists is replaced by aesthetics".

During this time, he was introduced to the home of Fräulein von Reutern, a friend of his family's. There he met with people his own age. His relationships with his contemporaries were "problematic", in that most of them were now at university. This usually left him feeling awkward in social situations.

In 1896, his poem "Madonna" appeared in a Viennese periodical and Hesse released his first small volume of poetry, Romantic Songs. In 1897, a published poem of his, "Grand Valse", drew him a fan letter. It was from Helene Voigt, who the next year married Eugen Diederichs, a young publisher.

To please his wife, Diederichs agreed to publish Hesse's collection of prose entitled One Hour After Midnight in 1898 (although it is dated 1899). Both works were a business failure. In two years, only 54 of the 600 printed copies of Romantic Songs were sold, and One Hour After Midnight received only one printing and sold sluggishly. Furthermore, Hesse "suffered a great shock" when his mother disapproved of "Romantic Songs" on the grounds that they were too secular and even "vaguely sinful."