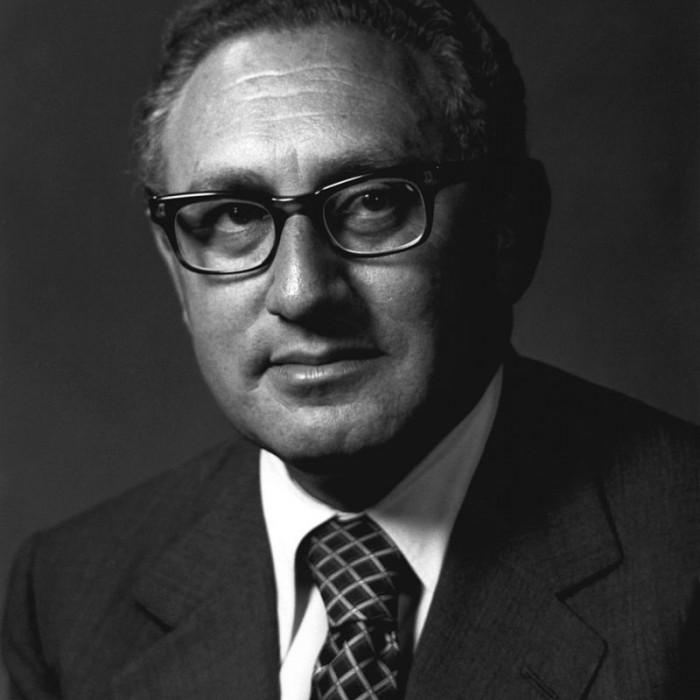 Henry Alfred Kissinger (born Heinz Alfred Kissinger May 27, 1923) is an American diplomat and political scientist who served as the Secretary of State and National Security Advisor under the presidential administrations of Richard Nixon and Gerald Ford. Born in Germany, Kissinger was a Jewish refugee who fled the Nazi regime with his family in 1938. He became National Security Advisor in 1969 and later concurrently United States Secretary of State in 1973.

For his actions negotiating a ceasefire in Vietnam, Kissinger received the 1973 Nobel Peace Prize under controversial circumstances,[3] with two members of the committee resigning in protest. Kissinger later sought, unsuccessfully, to return the prize after the ceasefire failed. After his term, his advice has been sought by world leaders including subsequent U.S. presidents.

A proponent of Realpolitik, Kissinger played a prominent role in United States foreign policy between 1969 and 1977. During this period, he pioneered the policy of détente with the Soviet Union, orchestrated the opening of relations with the People's Republic of China, and negotiated the Paris Peace Accords, ending American involvement in the Vietnam War.

Kissinger has also been associated with such controversial policies as CIA involvement in Chile and U.S. support for Pakistan, despite the genocide during the Bangladesh War. He is the founder and chairman of Kissinger Associates, an international consulting firm. Kissinger has been a prolific author of books on diplomatic history and international relations with over one dozen books authored.

General opinion of Henry Kissinger is strongly divided. Several scholars have ranked him as the most effective U.S. Secretary of State since 1965, while some journalists, activists, and human rights lawyers have condemned him as a war criminal.

Kissinger and Le Duc Tho were jointly offered the 1973 Nobel Peace Prize for their work on the Paris Peace Accords which prompted the withdrawal of American forces from the Vietnam war.

(Le Duc Tho declined to accept the award on the grounds that such "bourgeois sentimentalities" were not for him[40] and that peace had not actually been achieved in Vietnam. Kissinger donated his prize money to charity, did not attend the award ceremony and would later offer to return his prize medal after the fall of South Vietnam to North Vietnamese forces 18 months later.

In 1973, Kissinger received the U.S. Senator John Heinz Award for Greatest Public Service by an Elected or Appointed Official, an award given out annually by Jefferson Awards.

In 1976, Kissinger became the first honorary member of the Harlem Globetrotters.

On January 13, 1977, Kissinger received the Presidential Medal of Freedom from President Gerald Ford.

In 1980, Kissinger won the National Book Award in History[a] for the first volume of his memoirs, The White House Years.

In 1995, he was made an honorary Knight Commander of the Order of the British Empire.

In 2002, Kissinger became an honour member of the International Olympic Committee.