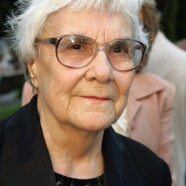 Immediately successful, it won the 1961 Pulitzer Prize and has become a classic of modern American literature. Though Lee had only published this single book, in 2007 she was awarded the Presidential Medal of Freedom for her contribution to literature.

Additionally, Lee received numerous honorary degrees, though she declined to speak on those occasions.

She was also known for assisting her close friend Truman Capote in his research for the book In Cold Blood (1966).Capote was the basis for the character Dill in To Kill a Mockingbird.