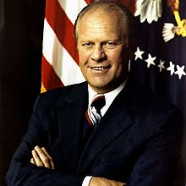 His parents separated 2 weeks after his birth, and his mother moved with him to Grand Rapids, MI, to live with her parents. On February 1, 1916, approximately 2 years after her divorce, Dorothy King married Gerald R. Ford, a Grand Rapids businessman.

The Fords immediately began calling her son JERRY FORD, and in 1935 his name was officially changed to GERALD RUDOLPH FORD, JR. The future President grew up in a close-knit family that included three younger brothers, Thomas, Richard, and James. Mr. FORD attended South High School in Grand Rapids, where he excelled scholastically and athletically. He was named to the honor society and both the ‘‘All-City’’ and ‘‘All-State’’ football teams.

To earn spending money he worked for the family paint business and at a local restaurant. He was also active in Scouting, and achieved the rank of Eagle Scout in November 1927— the only American President to do so.