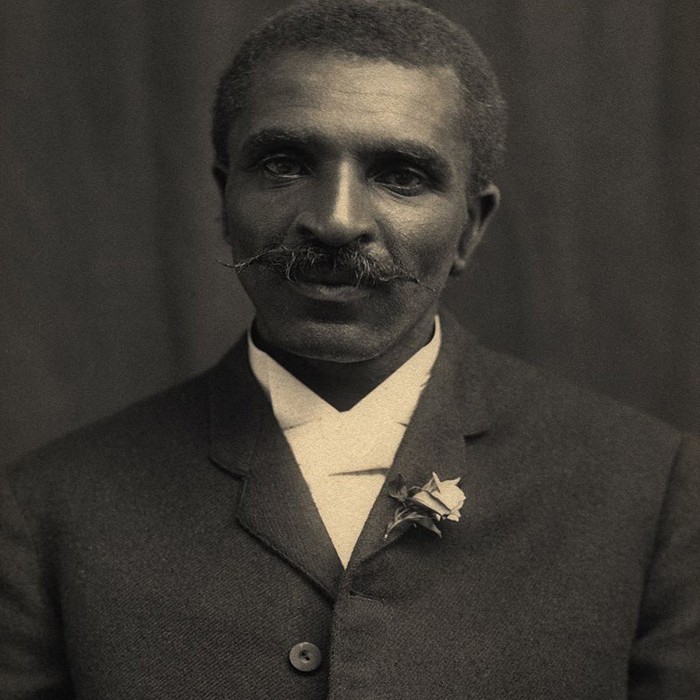 The exact day and year of his birth are unknown; he was born into slavery in Missouri, either in 1861, or January 1864.

Carver's reputation is largely based on his promotion of alternative crops to cotton, such as peanuts and sweet potatoes.

He wanted poor farmers to grow alternative crops both as a source of their own food and as a source of other products to improve their quality of life. The most popular of his 44 practical bulletins for farmers contained 105 food recipes using peanuts.

He spent years developing and promoting numerous products made from peanuts; none were commercially successful.

He was also a leader in promoting environmentalism. He received numerous honors for his work, including the Spingarn Medal of the NAACP.

In an era of very high racial polarization, his fame reached beyond the black community.

He was widely recognized and praised in the white community for his many achievements and talents. In 1941, Time magazine dubbed Carver a "Black Leonardo".

Carver was born into slavery in Diamond Grove, Newton County, near Crystal Place, now known as Diamond, Missouri, possibly in 1864 or 1865, though the exact date is not known.

When George was only a week old, he, a sister, and his mother were kidnapped by night raiders from Arkansas. George's brother, James, was rushed to safety from the kidnappers.

After slavery was abolished, Moses Carver and his wife Susan raised George and his older brother James as their own children.

They encouraged George to continue his intellectual pursuits, and "Aunt Susan" taught him the basics of reading and writing.

Black people were not allowed at the public school in Diamond Grove. There was a school for black children 10 miles (16 km) south in Neosho, George decided to go there.

When he reached the town, he found the school closed for the night. He slept in a nearby barn. By his own account, the next morning he met a kind woman, Mariah Watkins, from whom he wished to rent a room.

When he identified himself as "Carver's George," as he had done his whole life, she replied that from now on his name was "George Carver".

George liked Mariah Watkins, and her words, "You must learn all you can, then go back out into the world and give your learning back to the people", made a great impression on him.

At the age of thirteen, due to his desire to attend the academy there, he relocated to the home of another foster family in Fort Scott, Kansas.

After witnessing a black man killed by a group of whites, Carver left the city. He attended a series of schools before earning his diploma at Minneapolis High School in Minneapolis, Kansas.

Carver applied to several colleges before being accepted at Highland University in Highland, Kansas. When he arrived, however, they rejected him because of his race.

In August 1886, Carver traveled by wagon with J. F. Beeler from Highland to Eden Township in Ness County, Kansas.

In early 1888, Carver obtained a $300 loan at the Bank of Ness City for education. By June he left the area.

In 1890, Carver started studying art and piano at Simpson College in Indianola, Iowa.

When he began there in 1891, he was the first black student. Carver's Bachelor's thesis was "Plants as Modified by Man", dated 1894.

In 1896, Booker T. Washington, the first principal and president of the Tuskegee Institute, invited Carver to head its Agriculture Department.

Carver designed a mobile classroom to take education out to farmers. He called it a "Jesup wagon" after the New York financier and philanthropist Morris Ketchum Jesup, who provided funding to support the program.

Carver started his academic career as a researcher and teacher. In 1911, Washington wrote a letter to him complaining that Carver had not followed orders to plant particular crops at the experiment station.

Carver designed a mobile classroom to take education out to farmers. He called it a "Jesup wagon" after the New York financier and philanthropist Morris Ketchum Jesup, who provided funding to support the program.

Washington praised Carver in his 1911 memoir, My Larger Education: Being Chapters from My Experience. Washington called Carver "one of the most thoroughly scientific men of the Negro race with whom I am acquainted."

After Washington died in 1915, his successor made fewer demands on Carver for administrative tasks.

While a professor at Tuskegee, Carver joined the Gamma Sigma chapter of Phi Beta Sigma fraternity.

He spoke at the 1930 Conclave that was held at Tuskegee, Alabama, in which he delivered a powerful and emotional speech to the men in attendance.

From 1915 to 1923, Carver concentrated on researching and experimenting with new uses for peanuts, sweet potatoes, soybeans, pecans, and other crops, as well as having his assistants research and compile existing uses.

Carver developed techniques to improve soils depleted by repeated plantings of cotton. Carver's work was known by officials in the national capital before he became a public figure.

In 1916 Carver was made a member of the Royal Society of Arts in England, one of only a handful of Americans at that time to receive this honor.

In 1919, Carver wrote to a peanut company about the potential he saw for peanut milk.

During the last two decades of his life, Carver seemed to enjoy his celebrity status. He was often on the road promoting Tuskegee University, peanuts, and racial harmony.

Although he only published six agricultural bulletins after 1922, he published articles in peanut industry journals and wrote a syndicated newspaper column, "Professor Carver's Advice".

With his increasing notability, Carver became the subject of biographies and articles. Raleigh H. Merritt contacted him for his biography published in 1929.

From 1935 to 1937, Carver participated in the USDA Disease Survey. Carver had specialized in plant diseases and mycology for his master's degree.

From 1933 to 1935, Carver worked to develop peanut oil massages to treat infantile paralysis.

In 1937, Carver attended two chemurgy conferences, an emerging field in the 1930s, during the Great Depression and the Dust Bowl, concerned with developing new products from crops.

Carver had been frugal in his life, and in his seventies he established a legacy by creating a museum of his work, as well as the George Washington Carver Foundation at Tuskegee in 1938 to continue agricultural research.

Carver never married. At age forty, he began a courtship with Sarah L. Hunt, an elementary school teacher and the sister-in-law of Warren Logan, Treasurer of Tuskegee Institute.

George Washington Carver believed he could have faith both in God and science and integrated them into his life.

He testified on many occasions that his faith in Jesus was the only mechanism by which he could effectively pursue and perform the art of science.

He was not expected to live past his twenty-first birthday due to failing health. He lived well past the age of twenty-one, and his belief deepened as a result.

Beginning in 1906 at Tuskegee, Carver led a Bible class on Sundays for several students at their request. He regularly portrayed stories by acting them out.

A movement to establish a U.S. national monument to Carver began before his death. Because of World War II, such non-war expenditures had been banned by presidential order.

In December 1947, a fire broke out in the Carver Museum, and much of the collection was damaged.

Time magazine reported that all but three of the 48 Carver paintings at the museum were destroyed.

His best-known painting, displayed at the World's Columbian Exposition of 1893 in Chicago, depicts a yucca and cactus.

A second stamp honoring Carver, of face value 32¢, was issued on 3 February 1998 as part of the Celebrate the Century stamp sheet series.

In 1994, Iowa State University awarded Carver a Doctor of Humane Letters. In 2000, Carver was a charter inductee in the USDA Hall of Heroes as the "Father of Chemurgy".

Carver was given credit in popular folklore for many inventions that did not come out of his lab.

Carver worked for years to create a company to market his products. The most important was the Carver Penol Company, which sold a mixture of creosote and peanuts as a patent medicine for respiratory diseases such as tuberculosis.

Carver is often mistakenly credited with the invention of peanut butter. Carver is also associated with developing sweet potato products.

During his more than four decades at Tuskegee, Carver's official published work consisted mainly of 44 practical bulletins for farmers.