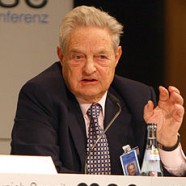 George Soros (born György Schwartz on August 12 1930) is a Hungarian-born American businessman, philanthropist, and political activist. He is currently the chairman of Soros Fund Management and the Open Society Foundations.

George Soros may have made a billion dollars short-selling the pound sterling, earning him the title of "The Man Who Broke the Bank of England," but what he really wanted to be was a philosopher.

The chairman of Soros Fund Management made a bold move in the early '90s to short-sell the pound sterling, speculating that the British government would be forced to break from the European Exchange Rate Mechanism (ERM) and allow the British pound to devalue in relation to other currencies.