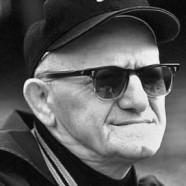 George Stanley Halas, Sr. (born  February 2, 1895 – October 31, 1983), nicknamed "Papa Bear" and "Mr. Everything", was a player, coach, owner, and pioneer in professional American football. He was the iconic founder and owner of the National Football League's Chicago Bears. He was also lesser known as an inventor, jurist, radio producer, philanthropist, philatelist, and Major League Baseball player. Most notably, he is considered one of the original co-founders of the National Football League (NFL) in 1920.

In 1963 Halas became one of the first 17 inductees into the Pro Football Hall of Fame.